For the 102nd time, the Grey Cup will be awarded to the best team in Canadian football.  What makes the big game so enduring and endearing? Here are 10 reasons.

Thirty years ago a CFL team was supposed to kick-off in Dartmouth, Nova Scotia. The franchise had been granted to begin play in 1984, but stadium financing fell through. Maritimers haven’t given up hope that their Atlantic Schooners will someday play for the trophy donated by the Earl Grey. Moncton has hosted Touchdown Atlantic regular season games in 2010, 2011 and 2013 after exhibition games in 2005 and 2006 in Halifax. The Schooners faithful reunites annually at the Grey Cup for what’s called a Down East Kitchen Party, complete with lobster rolls and greetings of “sociable!”
Baltimore was the most-successful team in the ill-fated American expansion of the 1990s. The team dusted off the old Colts name until the National Football League went to court. They were the CFLers or the Stallions after that. They played in consecutive Grey Cups, losing 1994’s in Vancouver to the B.C. Lions but winning the next year in Regina over Doug Flutie and the Calgary Stampeders. The moved to Montreal in 1996. Baltimoreans still come to Grey Cups, proudly wearing their team’s logo and professing a preference for three-down football. 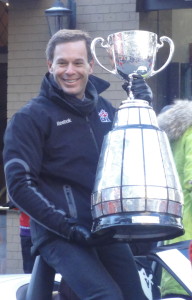 The world came to know them as vuvuzelas when South Africa hosted the World Cup in 2010. Here, they’re just called horns and CFL fans had either endured or enjoyed the sound for decades. That sound? Some have jokingly called it a “moose fart.”

It doesn’t revolve around Toronto anymore

The first Grey Cup was played in Toronto on Rosedale Field between the University of Toronto and Parkdale Canoe Club on Dec. 4, 1909; the Varsity Blues won. The Argonauts have won 16 of 22 appearances, both records. As Toronto has grown, interest in the CFL has waned. Even winning the centennial game at home in 2012 didn’t do the trick. So they are looking to move out of the stadium formerly known as SkyDome and into Toronto FC’s BMO Field. While there will be a few folks sporting the Double Blue on Vancouver streets this weekend, there will be exponentially more in the green of Saskatchewan’s Roughriders, the dethroned 2013 champions.

SCTV and Saturday Night Live alumnus Martin Short, a native of Hamilton, brought his buddy Tom Hanks to the 2013 Grey Cup in Regina, where they joined in the traditional Tiger-Cats “oskee-wee-wee” chant. Alas, the Roughriders won. KISS bassist Gene Simmons was a tad mellower in 2011 at Vancouver, watching the game from a private suite with his wife, Newfoundland-born, Saskatchewan-raised Shannon Tweed.
Like TV and radio, the CFL has Canadian content rules. The 44-man roster can include as many as 25 Americans. Diminutive ex-Boston College quarterback Doug Flutie won three Grey Cups in an eight-year CFL career and was voted the greatest player in league history in a 2006 TSN poll.

It’s not about the halftime show or the ads

Regardless of the teams, Super Bowl week discourse is dominated by anticipation for the million-dollar TV ads and the halftime concert. The 2004 event in Houston featured more of Janet Jackson than what had been advertised, thanks to the famed “wardrobe malfunction.”
The Grey Cup broadcast will no doubt feature double-doubles of ads for Tim Hortons and a halftime concert, American import Imagine Dragons, but it’ll be secondary to the game itself.

It’s older than the Super Bowl

Vancouver is hosting the Grey Cup for the 16th time. Its first was in 1955. That was a dozen years before Los Angeles hosted the AFL-NFL World Championship Game, which would become known as the Super Bowl. The 49th edition, er, XLIX, is Feb. 1, 2015.
The Super Bowl champion will be proclaimed, with great fanfare, the “world champion” by the NFL, despite the gridiron gladiators being predominantly American.
When the Grey Cup is awarded for the 102nd time on Nov. 30, the winning team will be humbly christened “Grey Cup champion.”

It’s bilingual when it needn’t be

Not until 1931 did the Montreal AAA Winged Wheelers host (and win) le grand jeu at Molson Stadium on the McGill University campus. It was a 22-0 win over the Regina Roughriders, who were amid a rough ride of five consecutive Grey Cup losses (a total of six in seven years). Montreal has hosted the game eight times — half as many as Vancouver. The 1977 crowd of 68,205 at Olympic Stadium remains the record.
Regardless of the finalists being from Calgary and Hamilton, there will be bilingual public address announcements, signage reading LCF (ligue canadienne de football) and Coupe Grey. It is not because the league is being politically correct, but that Quebec is a hotbed for football. The 50th Vanier Cup, Canada’s university football championship, will be contested in Montreal the same time as the Grey Cup parade in Vancouver.

It’s not exclusively for the rich and connected

Three-quarters of Super Bowl tickets are split between the 32 teams and 17.5% to the participants and 6% to the host city team. As little as 1% are available to the general public. The cheapest tickets retail for around $500. This year’s Grey Cup tickets begin at $150. There 5,000 available a week before the game. If not sold out, organizers have planned to treat members of the military and families of minor football players to the game.

Grey Cups are often decided by a golden toe.
The finest moment in Vancouver sports history was the 1994 game-winning field goal by B.C. Lions’ kicker Lui Passaglia. It kept the Grey Cup north of the border after the challenge by the Baltimore Stallions. Passaglia evaded the Tiger-Cats attempt to block his kick in the 1985 game and got a game-changing first down that led to a key touchdown before halftime. Passaglia was responsible for 19 of the Lions’ 37 points — almost as many as Hamilton’s 24. He only had 10 points in his 2000 swansong, but his final field goal was enough to clinch the win over the Alouettes.