FIFA Women’s World Cup Canada 2015 has turned into a tough sell in Vancouver. 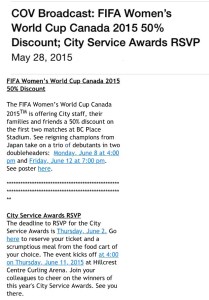 “Select your seats (max 20 per purchase),” says the poster linked to the memo sent to all City of Vancouver employees, their friends and families.

Vancouver drew the weak Group C. Japan is the defending champion, but Cameroon, Ecuador and Switzerland are Women’s World Cup rookies. Japan is destined to win one of these games by a blowout margin. All matches will be broadcast live.

“City of Vancouver is a significant partner,” said Canada 2015 spokesman Richard Scott. “Things are on an upswing.”

Scott said organizers anticipate filling the lower bowl of B.C. Place for the two matches. The 52-match tournament has sold 830,000 tickets so far, he said, with the goal of 1.5 million.

Tickets for the June 16 crossover match featuring tournament favourite United States against Nigeria are a hot seller, since fans from Washington and Oregon are expected to travel en masse. 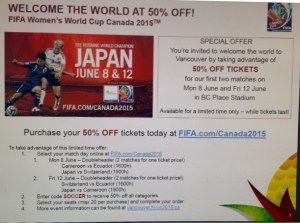 The tournament was already hampered last year by the turf war (Canada’s choice of synthetic turf was reaffirmed by FIFA), long before this week’s explosive arrests of 14 FIFA members and associates over a massive, $150 million-plus corruption conspiracy. Organizers were only able to sign-up three of the six hoped-for national sponsors.

Late word out of Zurich today: Canada Soccer is supporting Prince Ali of Jordan for president in the May 29 FIFA election. Canada is only one of 209 national associations casting a vote. So  there is a chance Sepp Blatter won’t be presenting the trophy on July 5.

And fans worldwide would say that would be for the good of the game.