The man in charge of safety and security on SkyTrain and West Coast Express is gone. 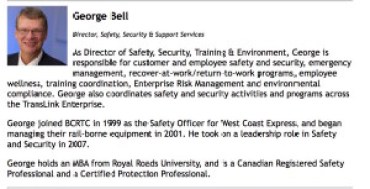 A source told me that George Bell was spotted outside Burnaby-based B.C. Rapid Transit Co., TransLink’s rail division, on the morning of Aug. 24, waiting for a taxi, with his suitcase. No memo was immediately issued about the latest personnel move. Bell’s outgoing voice mail message said he was on holiday and returning to the office on Aug. 24.

Later in the day, TransLink’s vice-president of communications, Colleen Brennan, confirmed that Bell is no longer with the company and his job is filled for the time being by Randy Fonger.

“For personnel reasons, I can’t comment on the reasons why,” Brennan said. “We do have someone acting in that position as of today and we’ll be recruiting for that position shortly.”

Coincidentally, on Aug. 20, former Vancouver Police Chief Jim Chu was appointed to the board of TransLink by the provincial government. On Aug. 21, SkyTrain’s 29th Avenue station was temporarily closed and a body removed from the tracks. Spokeswoman Anne Drennan said the cause of death was suicide. (Read more about SkyTrain deaths in the Georgia Straight.)

Metro Vancouver voters rejected the proposed 0.5% sales tax hike to fund TransLink expansion in the mail-in plebiscite; 62% of voters marked “No” on their ballots.

One thought on “Yet another TransLink departure”