They say hell froze over on May 6, when Rachel Notley led the NDP to victory in the Alberta provincial election, ending 44 years of Progressive Conservative rule.

Notley has surrounded herself with chief of staff Brian Topp, the architect of the failed B.C. NDP election campaign in 2013, and associate deputy minister of policy and planning John Heaney, the ex-chief of staff to B.C. NDP leader John Horgan. On Aug. 29, Marcella Munro told her Twitter followers that she was packing up and Alberta-bound to start a new job at Notley’s Calgary office.

Munro is a former CBC reporter, better known as a political operative with the B.C. NDP and Vision Vancouver and ex-Earnscliffe lobbyist. In a 2011 column, under the headline “Politics makes strange bedfellows,” Province columnist Mike Smyth looked at her relationship with Brad Zubyk, a lobbyist who switched from the NDP to the BC Liberals.

Her list of B.C. lobbying clients, all terminated by last year, was lengthy:

The Saturday before 2014 e-day, Munro hosted the Contemporary Art Gallery of Vancouver’s fundraising dinner where she supped together with BC Liberal executive director Laura Miller and her beau, Peter Faist (both bit players in the Ontario Liberals’ gas plants scandal), Don Millar, Robertson and Premier Christy Clark’s svengali of spin, and Diamond Isinger, the BC Liberal and Vision Vancouver social media attack specialist. On Nov. 15, election day, Munro sparked citizen complaints to Elections BC for Tweeting pro-Vision Vancouver messages, contrary to Elections BC rules that forbid campaigning on election day.

After the campaign was over, Munro split from Earnscliffe and announced she was forming a company called WPM Public Affairs.

On Dec. 29, with the clock ticking toward the end of the City of Vancouver’s fiscal year, Robertson’s chief of staff Mike Magee (the Vision Vancouver campaign manager) dipped into the Mayor’s Discretionary Budget and okayed a $15,000 no-bid strategic communications consulting contract for WPM (see below). Merry Christmas and Happy New Year.

In early March, Munro got another no-bid contract, this time worth $46,075 from TransLink, to work on the Mayors’ Council Yes campaign that urged Metro Vancouverites to vote for a tax hike to fund TransLink’s $7.7 billion expansion. Munro was technically a subcontractor: The unusual arrangement (posted below) was made between New Westminster, B.C.-based TransLink and a company in Calgary called StarDot Associates. As per the TransLink contract, StarDot was responsible for paying for the services of Munro as director of communications for the Mayors’ Council ($155 per hour) and Isinger as communications coordinator ($80 per hour). 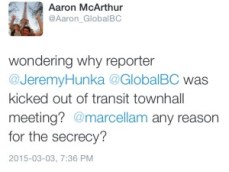 Munro was already at work for the Mayors’ Council in February, when she advised Mike Buda, the executive director of the Mayors’ Council, to ignore questions from a reporter (your humble servant) about the Mayors’ $6 million, taxpayer-funded Yes campaign budget and how the council was doling out contracts to companies connected to the ruling Vision Vancouver. The Mayors’ Council chair? None other than Robertson.

On March 3, Munro famously insulted and ejected Global BC reporter Jeremy Hunka from the Yes campaign’s telephone town hall at the offices of StratCom, the Vision Vancouver and 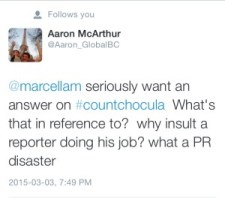 NDP polling and robocalling company that was paid a whopping $1,512,718 for its no-bid Mayors’ Council contract (according to figures released to me in August under Freedom of Information). This, the night after reporters were refused access to record the telephone town hall headlined by Robertson.

Even before mail-in plebiscite voting ended May 29, Munro was meeting frequently with Buda to plan how to spin the $6 million campaign budget and make it hard for reporters to tell the public precisely who got paid what. The June 10-published report was deliberately confusing, so as to hide from the public the actual amounts paid to contractors, such as StratCom and Munro. 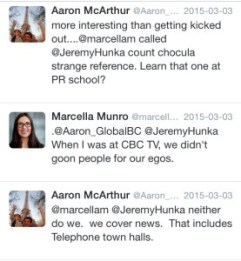 When the Canadian Taxpayers’ Federation-backed No campaign was heralded the victor on July 2, it was Robertson’s first defeat of his political career. Munro played a big role in that.

But that obviously didn’t stop Alberta’s new premier from hiring her.

“We are very happy to have Marcella join our Calgary office,” Notley’s press secretary Cheryl Oates told me. “As her title suggests, she is responsible for Southern Alberta stakeholder relations and managing communications out of the Calgary office. She reports to the Deputy Chief of Staff to the Premier, Adrienne King.”

Despite Notley’s promise to be transparent, Oates refused to disclose how much Alberta taxpayers are paying to employ Munro. “What you’re asking about is an HR matter. We don’t release individual’s salaries on a per-request basis.”

Earlier this year, the Calgary Sun crunched the numbers about public sector pay in Alberta. Based on the Sun’s findings, Munro will be paid a little less than Alberta Members of the Legislature ($134,000), but a heckuva lot more than a school teacher with 10-plus-years experience ($93,300) and frontline workers, such as social workers and jail guards (average $56,000).

UPDATE (Sept. 14): The Calgary Herald’s Don Braid profiled Munro in this revealing Sept. 14 column. Munro confesses that her BMW 325i is her “favourite possession” and she “loves all the good things petroleum does for me.”

Straight from the mouth of the communications mind behind the Vision Vancouver anti-oil tankers/anti-oil pipeline campaign. She was also paid to be the communications director of the TransLink Mayors’ Council in the failed Metro Vancouver transit expansion funding plebiscite.