One Christmas Eve stands out, more than the rest.

It was 1978 at St. Anthony’s Catholic church in West Vancouver. Midnight mass, with my parents and a couple hundred others. Some of them were my classmates in Miss Jacklin’s Grade 3 class at St. Anthony’s Elementary, which was on a different site than the church.

For once, the glass-enclosed alcove to the left of the pews was full. On closer look, I spotted a tall man with a very shiny forehead and long nose. That was someone famous that I had seen somewhere before. Prime Minister Pierre Trudeau? Nah, couldn’t be the Prime Minister! But I asked my parents and they confirmed that it was him.

I tried to be the first out the door after the priest and altar boys had finished their procession down the aisle. The Prime Minister emerged and I ambushed him… to say Merry Christmas and shake his hand, which he did with a smile. I had no pen or paper in my pocket, so I didn’t ask for an autograph.

I didn’t know it, but one of his sons, Justin, was celebrating his birthday on Christmas Day.

Below is his first Christmas card, as the 2015-elected Prime Minister. Note the prominently displayed soccer ball on the inside and outside of the card. Trudeau’s predecessor, Stephen Harper, was a hockey fan, first and foremost. Thanks to one of my sources for providing the image. I’m not on politicians’ Christmas card lists, nor do I care to be. I respect that they are doing important work in government, but, as a journalist, it is my job to cast a critical eye on their policies, programs and decisions year-round.

Below that is  Christy Clark’s fourth annual Christmas card as Premier of British Columbia. Yet again, featuring her son Hamish. My sources tell me that, in her house, Mele Kalikimaka will be the actual Christmas greeting of 2015. 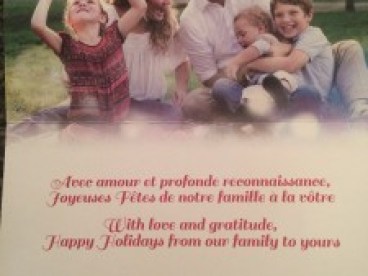 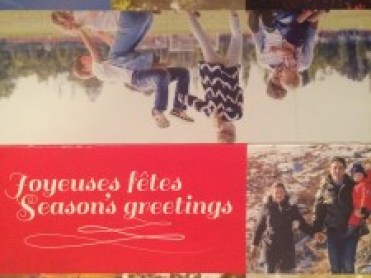 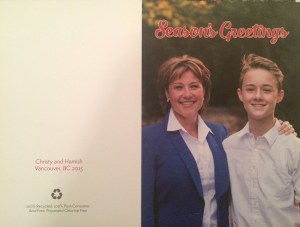 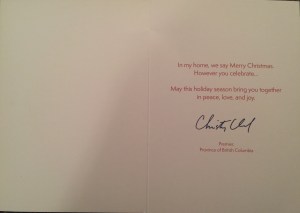