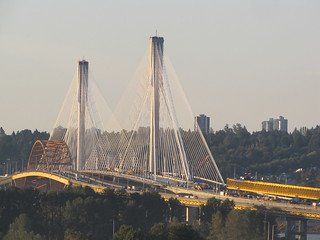 There are eight ridings up for grabs in Surrey in the May 14 provincial election. At dissolution, they were split between the ruling Liberals and opposition NDP.

Surrey is the province’s second-biggest city and British Columbia is well-known for its blacktop politics. Build a bridge. Rebuild a highway. Remind voters which party spent their hard-earned tax dollars to give the project the green light.

That is the modus operandi of the ruling BC Liberals, who took it to another level when Premier Christy Clark gave the go-ahead to slash the toll on the new Port Mann Bridge tolls from $3 to $1.50 per crossing.

Clark opened the bridge, the highlight of the $3.3 billion Highway 1 project, on Dec. 1, 2012 with a photo and video opportunity. Just 18 days later, on Dec. 19, 2012, the infamous “ice bombs” incident happened. Some 350 vehicles vehicles were damaged by falling ice and snow that had been allowed to gather on the bridge cables and towers.

This had been a problem on other cable-stayed bridges in North America and Europe and the documents below show that engineers knew it was a risk at the Port Mann. Some seem to have believed it would be a manageable risk, while others were concerned about safety. Transportation Investment Corporation, the Crown corporation set-up for the project, did not have a fulsome plan before the bridge’s grand opening.

There was another issue.

The bridge opening was hurried along for the Premier’s photo op. The bridge was opened during B.C.’s notorious stormy season, yet it did not have its own weather station. In fact, the closest Transportation Ministry weather stations were in Abbotsford and West Vancouver. One was finally bought for $100,000 and installed in February.

With better understanding of the conditions about to happen and as they were developing, the people that operate and maintain the Port Mann could have halted traffic earlier and avoided damage, injury and embarrassment.

Below are documents I obtained via Freedom of Information that include reports and correspondence from the files of Transportation Investment Corporation and contractor Kiewit-Flatiron.

The documents were part of a 500-page-plus release that included the lengthy U.S. Army Corps of Engineers technical report on superstructure ice protection by Charles Ryerson from April 2009.
If ice accretion is up your alley, you can download the Ryerson report here.
FOI 12012 – PMH1-Icebombs
2010goldrush.blogspot.com
News and views on Vancouver 2010 (and beyond) from Bob Mackin.