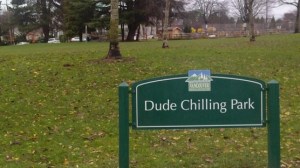 It’s official, the Dude Chilling Park sign can stay in Guelph Park under the guise of “public art.” By decree of the Vision Vancouver majority on the Board of Parks and Recreation, which apparently ran out of more important things to ponder at its Feb. 3, 2014 meeting.

The 2012-erected parody sign by artist Viktor Briestensky was inspired by the Michael Dennis sculpture called Reclining Figure. It became a social media sensation when Google Maps briefly renamed Guelph Park as Dude Chilling Park. Vision Vancouver Park Board commissioner Sarah Blyth took up the cause. When it comes to the all-important issue of joke signs in parks, you can’t call her blithe!

That got me thinking. Why not an open season on Vancouver Parks signs in this election year? Let free expression flourish among the trees, fields and benches.

Here are some of my topical suggestions.

3 thoughts on “Signs of the times in Vancouver”