That is a photograph of the Haywood Bandstand at Alexander Park, overlooking English Bay, in Vancouver’s West End.

Built in 1914 and restored in 1988, could this pleasant structure become the new, outdoor rehearsal space for a certain tuba-playing Mayor of Vancouver?

That is, if the neighbours of Gregor Robertson’s recently acquired penthouse suite object to the sound of the big brass instrument.

According to the Land Titles and Survey Authority, “Gregor Angus Robertson, Mayor” is the owner of a 1,764 square foot suite, with a declared $1.68 million value, in a 1976-built tower kitty corner from Alexander Park, a block south of Davie Street.

This is how real estate agent Emmie Tong described the penthouse on her website (which included the two photos): 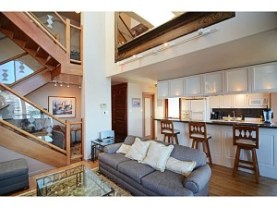 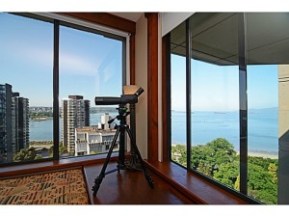 Real estate is an obsession for many in Vancouver and the mayor’s move from 912 West 23rd Ave., near Douglas Park, raised eyebrows in 2013. Why? Because he bought, with then-wife Amy, a $1.575 million duplex at 1645 Stephens St. — just a hop, skip and a jump from the then-proposed Point Grey Road bike lane. Robertson abstained from the public hearings and vote, but his Vision Vancouver caucus rubber-stamped the project, including the controversial closure of Point Grey Road’s so-called “golden mile.”

The Robertsons’ marriage broke down in mid-2014, but the mayor continued to list the Stephens house as his address on his nomination papers for the civic election. His registration withstood a legal challenge, but he never did confirm or deny that he was living in a condo at Patina on Barclay Street, behind the YMCA. While Robertson kept his precise whereabouts a mystery to voters, Vision Vancouver advertising criticized NPA challenger Kirk LaPointe for living at the University of B.C. campus.

After the election, Robertson’s relationship with singer Wanting Qu, an Olympic Village resident, came to light. Her name, however, does not appear on the property registration for the Alexander Park penthouse.