Canada Viagra. Fda Authorized Drugs. Purchase And Acquire Your Medication On The Web. Around The World Shipping And Delivery. Every Person Would Actually Like To Acquire Free Of Demand Within The Local Pharmacy At Property Beneath explanation In A Natural Way! You Do Not Need To Have A Prescription To Acquire The Capsules. A Wonderful Location Not Only To Acquire But Also To Get Comprehensive Data About Medication. 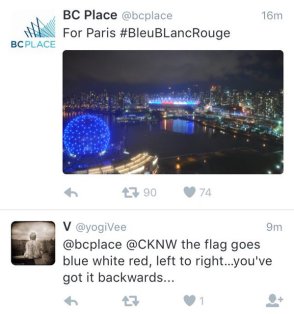 Do pardon B.C. Place Stadium for the French flag faux pas on Nov. 14.

Instead of showing bleu, blanc et rouge to remember the 129 innocent victims of the previous day’s vile jihadist terrorist attacks in Paris, the stadium’s lights were lit blue, red and white or red, white and blue, depending on your perspective.

The sequence was eventually corrected, after B.C. Place’s Twitter account claimed “it was designed with the best intentions from the perspective inside the stadium.”

Could this error have been the legacy of Thursday’s sudden departure of director of engineering and maintenance Mike McFaul?

I can exclusively tell you that general manager Ken Cretney called a staff meeting where he announced McFaul’s replacement by Brian Griffin, director of facility operations.

McFaul was a 2012 import from Seattle’s CenturyLink Field, where he was facilities director at the home of the Seahawks and Sounders. At B.C. Place, he was paid $118,670 in 2014.

Griffin was the right-hand-man of general manager Howard Crosley on Jan. 5, 2007 when the B.C. Place air-supported fabric roof spectacularly ripped and collapsed under the weight of heavy, wet snow. Management of the dome was trying to save money and refused to activate the roof-heating system. When the air pressure was hiked, the slushy snow avalanched and cut a hole on the west side. That incident was the catalyst for the controversial $514 million renovation that included installation of a retractable roof.

The Nov. 14 tricolour tribute happened, coincidentally, nine years after B.C. Place janitorial contractor Pritam Kaur Sandhu collapsed on shift and died later in hospital. I reported in 2009 that stadium management and Sandhu’s employer, Modern Cleaners, withheld the incident from WorkSafeBC — despite rules requiring the immediate reporting of a worker’s death to the provincial workplace health and safety regulator.

Speaking of Paris, the Conference of the Parties 21 — aka, the United Nations climate change convention — is Nov. 30-Dec. 11. It will be the world’s biggest gathering of political leaders and industrialists in 2015, under the guise of saving the planet. Modest proposal: delay the climate change talks to next year, and change the subject matter of the Paris meetings. The events of Nov. 13 reminded us that there are more important and immediate things than what may or may not happen to the environment a century from now.

The UN is relying on a report by some of the world’s top scientists who reached consensus that, on the balance of probabilities (not beyond reasonable doubt), humans are influencing an uptick in global temperatures.

Meanwhile, the world has gone far beyond the tipping point, with far too many innocent men, women and children still dying in wars, rampage shootings, and jihadist terror attacks. Whether it’s Sandy Hook, Syria, or the city by the Seine, enough is enough. Now is the time to convene the world’s top experts in science, education and law, and policy makers and world leaders to chart the way forward for a more peaceful planet.

Redirect the effort and investment in fighting climate change to halting the poverty and ignorance that fuel hate.

Back in 2000, the UN released its Millennium Development Goals, an ambitious eight-point plan that was supposed to be achieved by 2015. The goals included eradicating extreme poverty and hunger, achieving universal primary education, and reducing child mortality. Dec. 31, as you know, is the end of 2015 and the world will fall far short of meeting these lofty goals that were set in the year 2000.

If all the children on this planet were adequately fed, clothed, housed and educated — as they were supposed to have been by this year — chances are there would be more happy and healthy humans, less likely to engage in wanton violence like that which horrified the world in the City of Light on Friday the 13th.

3 thoughts on “Red-faced after white-roofed wonder blew it”