In the real world, when an employee quits a business and her replacement has been named, a transition takes place.

For instance, the ex-employee’s outgoing voice mail is changed to reflect the new hire. The old greeting with the ex-employee’s name is erased. A new one is recorded, with the name of the new employee. It can be done relatively quickly. The technology is not cumbersome.

Usually, this task is treated as a priority when the transition involves the top-ranking staff position.

The BC Liberals, who reported $10 million in 2014 revenue, claim to be the party that knows business. But it is a party that evidently doesn’t operate in the real world.

Bear with me for a moment. Here’s the background.

On Dec. 17, 2015, BC Liberal executive director Laura Miller was charged by the Ontario Provincial Police with breach of trust, mischief, mischief in relation to data and misuse of a computer system to commit mischief. 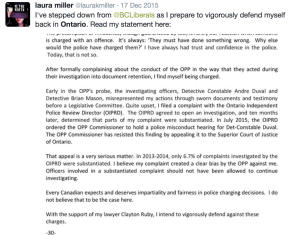 The charges relate to her time as deputy chief of staff to Liberal Premier Dalton McGuinty and stem from the mass-deletion of information relating to the politically motivated decision to cancel two gas-fired power plants in time for the 2011 election. It may have cost Ontario taxpayers a billion-dollars, but it kept the Liberals in power. Chief of Staff David Livingston was similarly charged.

Miller originally came west to work on the BC Liberals’ 2013 campaign with another Ontario import, former McGuinty chief of staff Don Guy.

When the charges were filed, Miller immediately announced, via Twitter, that she had “stepped down from @BCLiberals to prepare to vigorously defend myself back in Ontario.”

The next day, Dec. 18, Evan Southern sent a memo to party members, announcing his appointment as acting executive director. Southern joined the party headquarters as the director of operations on Nov. 30, after working as Premier Christy Clark’s director of issues management.

Southern got unwanted publicity in October when Information and Privacy Commissioner Elizabeth Denham published her report that found mass-deletion of email in the BC Liberal government. Southern was the unnamed person in the Office of the Premier who used Post-It notes to track Freedom of Information requests.

On Feb. 1, I called the BC Liberals  to find out whether Mark Robertson had a phone extension at headquarters. I was working on a story for The Tyee about his involvement in the Coquitlam-Burke Mountain by-election. Robertson is the field organizer charged with Election Act offences after a 2012 by-election in the Tri-Cities. The charges stem from the wider investigation of the Quick Wins scandal.

I didn’t find Robertson’s voice mail box, but I found Miller’s. Her name was on the main prompt and, when I pushed “1,” there was her voice, repeating her title as “executive director.” It was as if she had never left.

Three weeks later, when I called on Feb. 22, nothing had changed. Click below and listen to the recording.

I also tried Miller’s email, which I found is set to “out of office” auto-reply and lists email addresses and names (but no titles) for Southern and Jillian Stead.

President Sharon White did not respond for comment, but Stead, the communications director, wrote in an email: “Thank you for bringing this oversight to our attention. Our voicemail has been corrected. To clarify, since Dec. 17, 2015, Laura Miller is neither an employee or on contract with the Party.”

I called the BC Liberal headquarters after 6 p.m. on Feb. 23 and Southern’s name had been added to the phone directory. When I pressed “1,” it went to Southern himself. I asked him about why Miller’s voice mail remained on the system, unchanged, after more than two months.

“We answered that question to you earlier, it was an oversight on our part, we made that change as soon as you brought it to our attention,” Southern said.

So, there you have it. An “oversight” that lasted more than two months and wasn’t corrected until a reporter brought it to the attention of the president of a $10 million operation.

Well, maybe the BC Liberals just don’t operate in the real world.

If Miller isn’t working for the party anymore as a staffer or contractor, is she helping in other ways?

Southern claimed she’s no longer involved in the party, but a source told me that she participated in a meeting last week with party strategists who are planning for the 2017 re-election campaign.

“I can’t really comment on that kind of stuff, that’s not something that I can comment to you on the phone,” Southern said.

Miller and Livingston’s case is before a judge on Feb. 24 in Toronto. Miller announced to her donors on Feb. 23 that  she had switched lawyers: Clayton Ruby and Annamarie Enanjor were replaced by Scott Hutchison of Henein Hutchison LLP, the law firm known for defending disgraced CBC host Jian Ghomeshi.

Does a new lawyer signal a change in strategy? A source close to the BC Liberals indicates a plea bargain is a distinct possibility.

3 thoughts on “Did Laura Miller really quit the BC Liberals in December?”